Leave it to us

Sweet’n’Sour Sugar ; But it Doesn’t Have to be This Way

From October, in many parts of the world, the sugar crop is about to be harvested. ‘Sweet’, you might say, but to some people, especially those who live in the vicinity of some of the plantations, ‘sour’ is the feeling which best conjures up their opinions at this time of year, because this is when the sugar- cane is quite literally set fire to. The purpose of this burning is to remove the outer leaves of the plant, in order better to access the cane itself, in which is found the juice, and through processing, the sugar crystals. 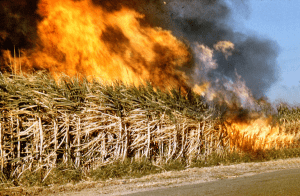 More through tradition than necessity, this burning causes huge volumes of pollution to enter the atmosphere, adding to the world’s CO2 emissions.

Brazil, the world’s largest grower of sugarcane, has followed through with its declared policy of ceasing the tradition of burning the cane in the fields, and instead, uses these outer leaves to create power through an enclosed incineration process. This power runs the machinery which processes the sugar. Furthermore, the excess electricity created goes into Brazil’s national grid.

So vast is Brazil’s sugar industry, it is estimated that once its planned expansion comes to fruition, the country could reduce current global carbon dioxide emissions by as much as 5.6 %. Sugarcane-based ethanol, the major product created from Brazil’s sugarcane, generates only 14% of the carbon dioxide emissions of petroleum. Most cars in Brazil are flex-fuel, which can run on ethanol, gasoline or a mixture of both. By 2012, Brazilian gas stations were selling a greater volume of ethanol than gasoline.

Whilst addressing the problems of climate change is at the top of most governments’ agendas, let us hope that more companies within the sugar industry, ‘take a leaf’ out of Brazil’s book, and cease the tradition of open field pre-harvest burning.

Bearwood has supplied equipment to the sugar industry, worldwide, for 40 years in the form of spare parts for the processing machinery, centrifuges, tractors, pumping, safety and more.

If there are parts you are having trouble sourcing, let us locate those ‘hard to find’ and obsolete items to help you build a more sustainable business structure.

If you’d like to know more information regarding our services then please get in touch.